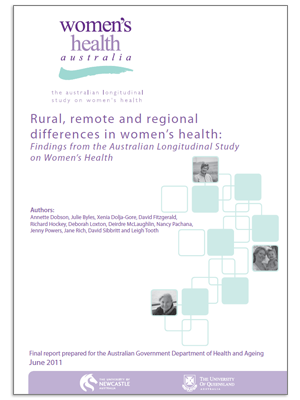 Much has been published about rural health disadvantage in Australia, including a series of reports by the Australian Institute of Health and Welfare (AIHW). The AIHW concludes: ―… it is not currently possible to apportion the generally poorer health outcomes outside major cities to access, environment or risk factor issues. It is likely that each of these three play a part (AIHW, 2011).

The Australian Longitudinal Study on Women‘s Health (ALSWH) is well-placed to elucidate these reasons using detailed data provided by women from across Australia. ALSWH participants have taken part in five surveys over 15 years and many have consented to use of linked data from Medicare Australia.

The findings reported here can be summarised in three broad themes:

1. Generally poorer health of women living in regional and remote areas.
2. Differences in access to and use of a wide range of health services.
3. The resilience of rural women and characteristics of life in rural communities which ameliorate sometimes difficult conditions.

It is important to note that within each of these themes there are contradictions and inconsistencies in the findings, and these emphasise the need for further research to allow deeper understanding and more nuanced responses. The study findings also show clear examples where government policies have been effective in reducing health inequities, as well as highlighting situations in which changes in policies and practices could lead to further improvements.